A Phragmites management program was implemented by the Village of Mill Neck in 2011 to eradicate Phragmites australis in a 1.5 acre stand located along the shoreline of Mill Neck Creek. Two Management Areas were identified, one with a dense monoculture of high-vigor Phragmites and the second a low-vigor stand of Phragmites mixed with native high marsh vegetation. Control of Phragmites from 2012-2015 was via repeated cutting, which was effective at reducing Phragmites size and density. However, due to the tall height of native plants that recruited to the site by 2015 (i.e. saltmarsh bulrush Bulboschoenus robustus), Phragmites could not be cut to a height below. 2.0-3.0 feet, reducing the effectiveness of Phragmites control through repeated cutting.

In the wetlands associated with Long Island Sound embayments, Phragmites australis area increased by 106.6 acres between 1974 and 2005 (NEIWPCC, 2015). Phragmites expansion has contributed to the drastic loss of native high marsh communities and led to the near eradication of coastal fresh marsh communities.

Phragmites management was undertaken by the Village of Mill Neck on a 4.4 acre property located on the northern side of the DeGraff Causeway/Cleft Road separating Beaver Lake (North Shore Wildlife Sanctuary) and Mill Neck Creek (Oyster Bay NWR)(Figure 1). Phragmites has been present at this site since at least the early 1970s, as a well developed Phragmites stand can be observed on the 1974 NYS Tidal Wetland Inventory Maps (Figure 2). Before management, the site consisted of the an approximately 1.1 acre Phragmites monoculture with shoot heights exceeding 12 feet, an 0.5 acre stand of low-vigor Phragmites (i.e. 6-8 feet in height) mixed with marsh elder (Iva frutescens) and other native high marsh vegetation, a 0.15 acre area of herbaceous high marsh, and surrounding areas of intertidal marsh (Figure 3). 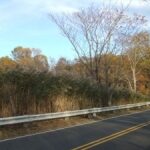 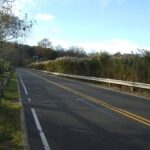 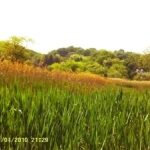 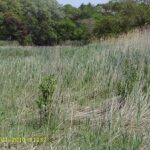 The approved site plan for the implemented Phragmites management is shown in Figure 4 General details and specifications for the repeated cutting, herbicide application, and monitoring are provided below: 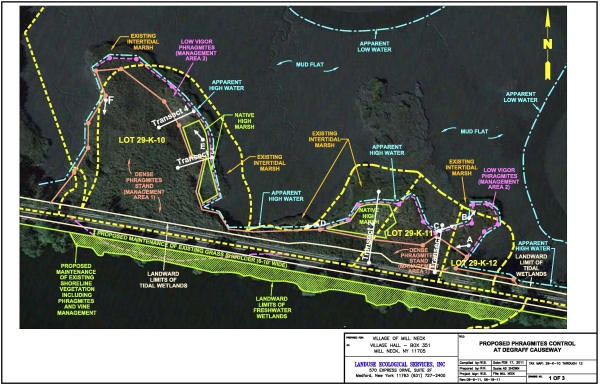 Due to the tall height of many of the native herbaceous plants such (as the bulrushes Bulboschoenus robustus and Schoenoplectus americanus), it was typically not possible to cut the Phragmites shoots to a height of 1.5-2.0 feet frequently throughout the growing season. Instead, Phragmites shoots were cut above the height of the bulrushes. This resulted in increased bulrush recruitment at the site, but also reduced the effectiveness of Phragmites control through cutting.

Targeted herbicide application directly to Phragmites shoots and leaves was conducted in 2016 to minimize potential disturbance to regenerating native vegetation, per the following methodology:

Four transects were established at fixed points through the Phragmites stands and extending to the seaward edge of the existing marsh (Figure 4). The transects ranged in length from 55 to 110 feet (16.8 to 33.5 meters) Plant community composition and abundance were sampled at 1m2 sampling plots located every 15 feet (4.6 meters) along each marsh transect. Monitoring was conducted annually, between August 1 and October 1. Percent cover attributable to each observed plant species was qualitatively assessed to the nearest 5% and recorded. Durable 1.5 m Carsonite posts were installed at the landward and seaward edge of the monitoring transects to allow repeat monitoring of marsh positions.

After three full seasons of Phragmites management through repeated cutting, a decrease in Phragmites cover was observed with % Phragmites cover declining from nearly 100% to 41.3 ± 30.2% within the site's high density Phragmites monoculture and from 57.0 ± 46.4% to 25.2 ± 27.5% across all monitoring plots (Figure 6). The management efforts clearly were successful in reducing the size and density of the Phragmites stand.

However, the repeated cutting did not result in complete control of Phragmites during the first three years of management. Phragmites control was limited, in part, to the increased the abundance of bulrushes (Bulboschoenus robustus and Schoenoplectus americanus). The bulrush recruitment was certainly a positive development; however, due to the 3.5-4.0 foot height of the bulrushes, it was not possible to cut Phragmites with sufficient frequency to attain control in portions of the site where Phragmites and bulrushes were mixed. In some locations within the project site, mixed stands of Phragmites and marsh elder presented a similar constraint.

After a targeted herbicide application in the early fall of 2016, Phragmites cover decreased further to 10.5 ± 15.6% within the site's Phragmites monoculture and to 6.3 ± 12.0% across all monitoring plots (Figure 6). 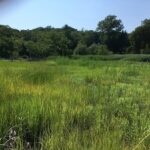 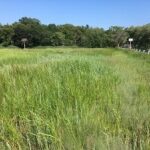 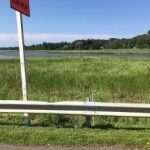 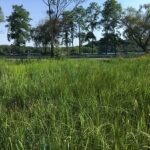 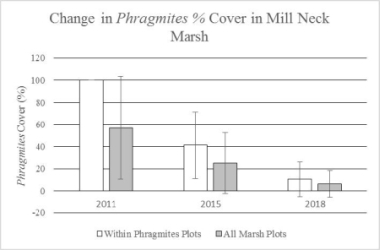 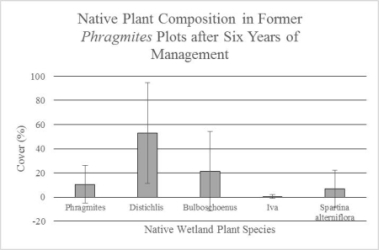 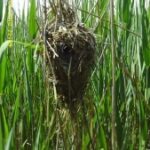 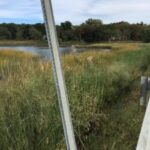 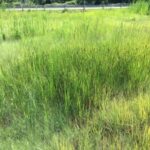 Figure 7. (a) Marsh wren nest, (b) switch grass seeded along roadway and berm, and (c) bulrush shoots and inflorescences.

Phragmites management greatly reduced % Phragmites cover and increased native wetland plant diversity at the site. The multiple control methods (i.e. repeated cutting and herbicide application) had complementary benefits that were necessary to achieve the Village of Mill Neck’s ecological objectives. Benefits of the repeated cutting phase of the project include:

Benefits of the herbicide application phase of the project include:

It is anticipated that maintenance herbicide treatments via backpack sprayer and/or wiping will be conducted as needed every 2-4 years. The next herbicide treatment at the project site is scheduled for the late summer/early fall of 2019.